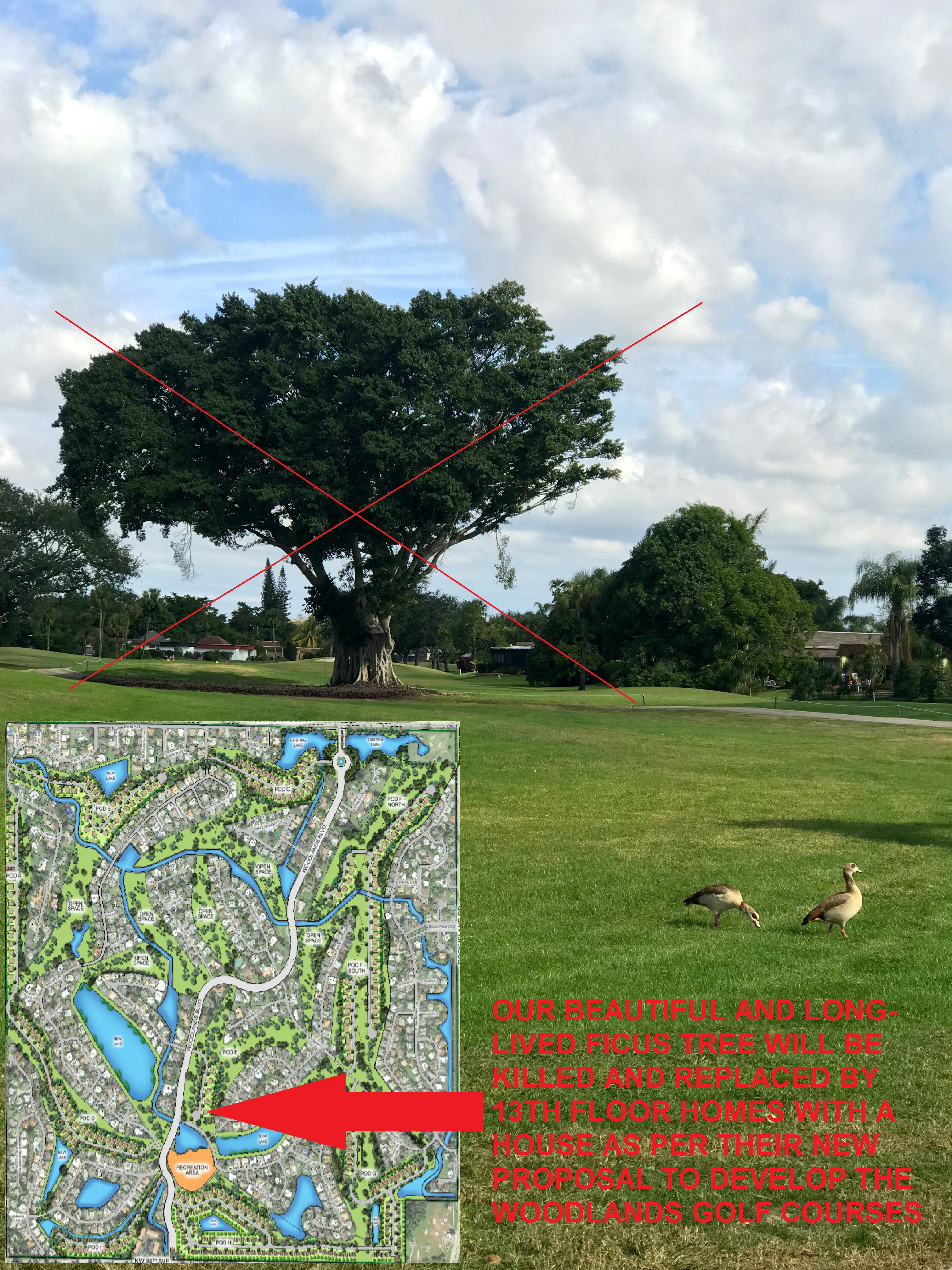 Three generations, if not four, of woodlanders@tamarac have known and surely loved this witness to their history. Its broad shade, fruits that are appetizing to amazing creatures, enormous purifying power and a natural longevity greater than 150 years, make our Moreton Bay Fig tree (Ficus Macrophylla), in the teeing ground of hole one at the east course, irreplaceable for all those that coalesce around it for food and shelter, boldness and inspiration, or, memories and spiritual connection.

I measured it with a smartphone application and the result was 49 feet tall, with a trunk circumference of 236 inches and a crown spread of 65 feet. When young their growth rate is faster, slowing to an average canopy growth rate of almost a foot per year after it reaches 5 years. This size estimation and the knowledge of the average canopy growth rate supports the assumption that our champion tree is as old as the City of Tamarac.

Nevertheless, for an accredited measurement the guidelines require that the tree’s circumference is measured around the trunk at 4-½ feet above the ground with a diameter tape or regular tape measure. The height from the ground level to the highest point using an instrument such as a laser hypsometer or clinometer. And the average crown spread by adding together and dividing by two the measures of the widest point and the narrowest point of the crown.

And here they come for the one we praise as a tangible linkage to the history of The Woodlands Country Club. The one to be deemed venerable because it has been there, since the community was first developed. Undoubtedly, a key component of a century-long evolving scenic that architects Robert Von Hagge and Bruce Devlin embedded in their design of the 18-holes, par 72, east course. A living entity with evergreen leathered foliage that, although seemingly silent, can communicate so much as we are drawn to it, and approach with openness to experience a timeless connection to people and events from the past to the present.

The most recent site plan proposes houses on the soil that has sustained the prosperous half-century life of one beautiful tree that witnessed our community lifetime, threatening a heritage of beauty and wellbeing.  The demise of this tree will be induced a century too early because it has been regarded as collateral casualty by 13th Floor Homes. The pinnacle exaltation of purely materialistic values, a never-ending disregard of the environmental damage and the decline of the wellbeing of the individual and the society to favor economic growth. A proposal supported and fueled through an introductory campaign to create individual alienation and civic disengagement within the community.

This tree species sets itself apart by its size and rapid growth that restrict where it can progress to full maturity. Trees that achieve more than half potential are uncommon. In addition to being larger than other trees, it has interesting natural characteristics that make it uniquely attractive. An array of descending aerial structural roots that makes a living and ever-growing sculpture. They are an art of God that exist with the purpose of stabilizing and sustaining the tall trunk and the heavy branches.

Native to Australia’s shore in Moreton Bay, Queensland, this fig tree was first grown in California in the second half of the 19th century. Older and bigger specimens of the Moreton Bay Fig tree (Ficus Macrophylla), are listed as some of the world’s monumental trees in the categories of:

In California, various specimens of this beautiful tree are considered botanical treasures that attract the public interest and are photographed thousands of times per year. The California Registry of Big Trees lists as National Champion a large Moreton Bay Fig tree growing in Glendora, that is 99 feet tall, with a trunk circumference of 569 inches and a crown spread of 129 feet. This specimen is listed in Glendora as a protected tree and its preservation ordinance stipulates that it shall be maintained by the city.

The Orange Community Historic Society listed, last September of 2015, the Moreton Bay Fig tree in front of the Holy Family Catholic Church on South Glassell Street as the largest living thing in Orange. It was planted in 1875. An older one, amazingly beautiful and known as the Wedding Tree, was planted in 1874 in the McRae/Albright Ranch House in Spring Valley. It is the oldest of its kind in California.

The city of Los Angeles recognizes the following plantings of Moreton Bay figs as historic-cultural monuments:

Other Moreton Bay fig trees are also celebrated, the one at the headquarters of the Auto Club of Southern California, planted in 1894, had a 100th birthday celebration party in 1994 hosted by the Auto Club.

I could not confirm the story about the 80 feet tall Moreton Bay fig tree in the Fairmont Miramar hotel in Santa Monica but is fun to think that is true. In 1880 an Australian sailor bartered with a bartender offering a Moreton Bay fig tree sapling to settle his bar tab. The bartender then gave the sapling to the wife of Senator Jones and it was planted in the yard of their estate.

As I approach to the end of this essay, let’s clarify that I am not trained in arboriculture nor reached out to any of these scientists to determine the species of this tree. Its large size, broad crown, thick branches, small-rounded fig fruits and above-ground buttress roots reduced the possible universe of about 800 species to a few hermaphrodite species in the genus of large strangler fig trees that produce figs inedible or less palatable to humans. Finally, I concluded the process of identification by elimination with the visual comparison of its pointed oval leaves with glossy dark green upper side and rusty lower side, and its pale yellowish flowers to pictures of the different species of large strangler fig trees found in the Internet. Moreover, I look forward to gathering and discussing a diversity of opinions, that will help to learn more about this marvelous tree and to summon allegiance to preserve the conditions needed for it to be healthy.

To conclude, I would like to ask my neighbors to check the most recent site plan and look around to identify other long-lived existing trees that would fall victims to the 13th Floor Homes proposal if approved by the government authorities. I am sure that there are other unique natural specimens in the fairways of the golf courses that must be saved.