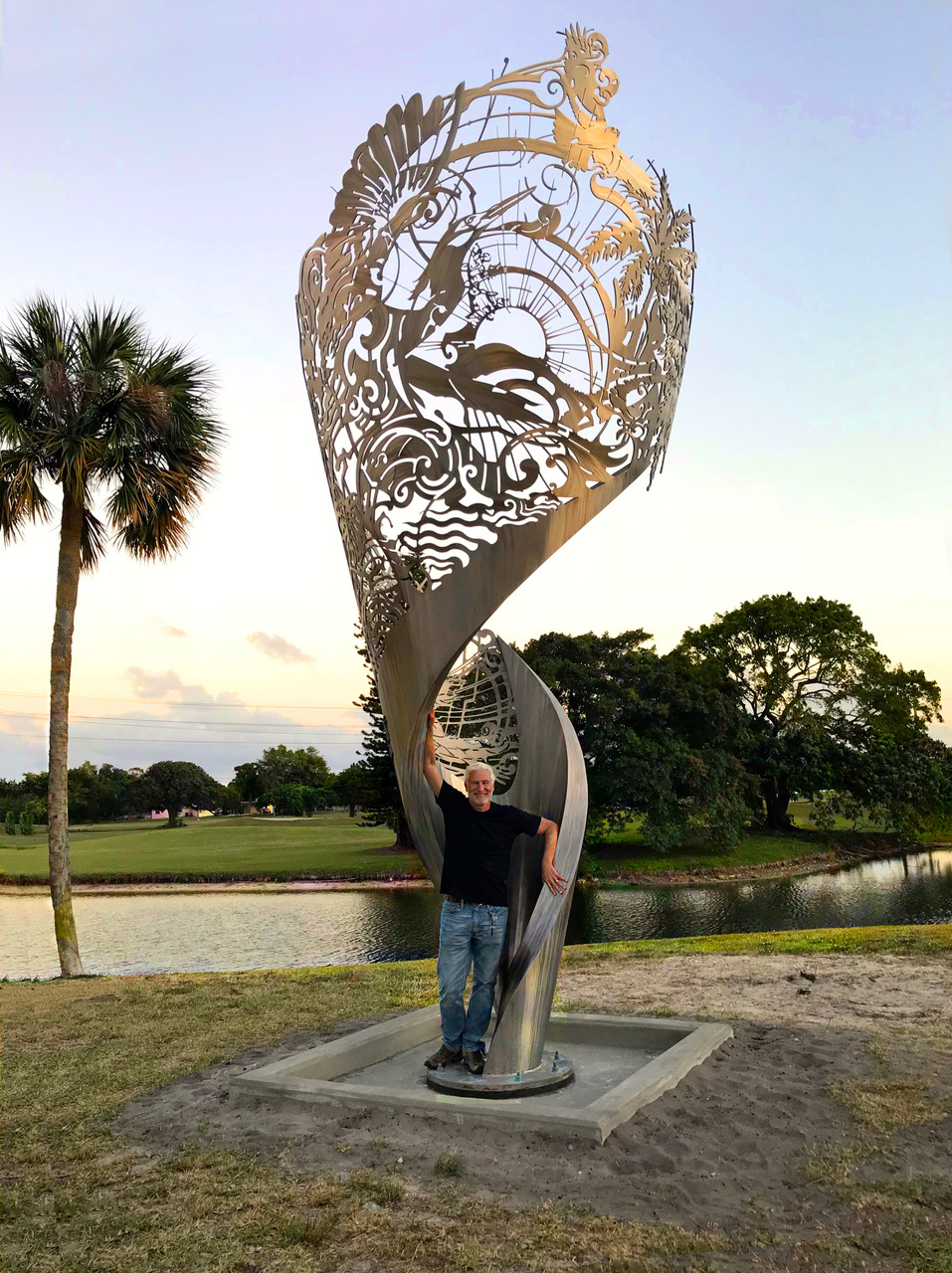 Public art causes debate. I experienced it firsthand yesterday when on my way to work spotted the installation of a beautiful sculpture in the northern facade of The Woodlands community. I shared the sighting with my neighbors through the social networks attracting attention within few minutes with most of the interest focused on its meaning and location. At this stage we were engaged in an interactive controversy about what it had to be, although none had yet the opportunity to appreciate it in detail. All we had was a name and a picture of the early prototype, but this process revealed what was a meaningful response to the community landscape and would be the best expression of our collective inner values. Birds and coyotes, long lived nature and open spaces surfaced as the unquestionable core of the community’s sense of identity and were deemed essential to forge the connection between the artwork and the residents.

It was a long day until I finally approached the sculpture by the sunset, and as I walked towards it realized that I was going to meet the artist. I had invested some time browsing for Roger W. Stoller and he was there, by his creation, taking pictures of it. I found that Roger W. Stoller is a humble genius, a beautiful soul with the talent to carve metal into the amazing piece of artwork standing and shining in front of me and rendering recognition to the beauty of our community. Roger told me that he designed it specially for the site and decided to include realistic representations of our natural environment. It has birds, coconut trees and a big shiny sun.

Me and my wife spent a lovely sunset with Roger celebrating his legacy to the culture of our city and to the social cohesion and integration of The Woodlands. He also shared that the sculpture was transported by truck from his studio in San Jose, California. It spent the night in an empty lot in Rock Island and was finally forklifted from The Woodlands Boulevard to its designated site. Roger directed the installation and spent the whole day at the site in The Woodlands.

Roger W. Stoller is a very successful and innovative sculptor whose public artworks are recognized as important landmarks. “Tetrahelix” at Google corporate headquarters, “Evohelix” commemorating South San Francisco centennial, “Tetra Con Brio” at the Music Center at Strathmore outside Washington D.C., “Coastal Helix” on the roundabout on Pacific Coast Hwy in Carlsbad south of Buena Vista Lagoon in San Diego County, glow between others. Roger adds to his creations what he learns important to the community. In this sculpture called “VIVO” (the name means “lively, bright, intense”) at the Woodlands in Tamarac, he decided to put into the piece a combination of realistic and abstract images. I explained to him how I learned, just a few hours before, what was a genuine representation of our ecosystem for our community. I did not mention that he missed the coyote, though. But later I had a restoring moment of mindfulness in this transformed open green space and recommend it to anyone willing to find their coyote and many other inspirations, go visit the site and enjoy the sculpture and surroundings from time to time.

Roger W. Stoller recently installed a wall piece for the El Paso Zoo, a representation of a giant head of a giraffe, inside of which many other African animals are to be found in a “seek & find” aspect to be enjoyed by adults and kids alike. In May he will come back to visit us for the ribbon cutting ceremony of the sculpture in The Woodlands. I encourage the whole city to accompany Roger and tell him about your cognitive and sensory experiences with this artwork, you will regret missing the opportunity to meet this talented artist. All this is recordable information for the history of our community and for our collective memory.

Enjoy the space of inclusion that this artwork has created in our community.

Thanks to the city of Tamarac for showing some love.

List of people involved with creating “Vivo”, we would like to recognize your contributions to bring this icon of beauty, inspiration and social cohesion to our community. Thank you all very much.