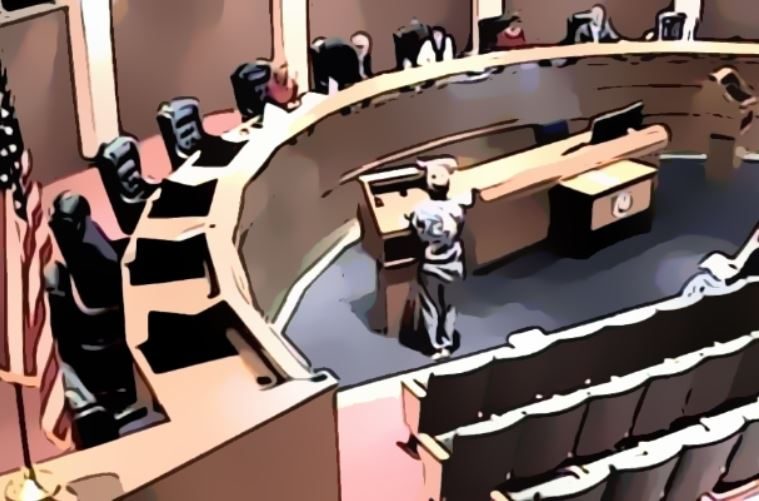 By the time the Battle of the Alamo took place the city was already 100 years old. Today it is a monument for the defenders, volunteers that made their last stand against the oppressor and inspired many others to fight fiercely under the same cry of “remember the Alamo” until they defeated the cruel forces of a villain and despot dictator.

As we all concerned residents stand with determination and rally in diverse ways to preserve The Woodlands while besieged by 13th Floor Homes and its supporters, a recent act of individual participation by Jeffrey Shapiro, from Section 8, must inspire all of us. Jeffrey stood gallantly during his chance to speak in the May 9th regular commission meeting, expecting no backup and determined to cover the flank of the Tamarac commission at its chambers in the city hall.

Jeffrey spoke eloquently about the recent survey sent to the residents of The Woodlands by 13th Floor Homes, and with his participation he set free something that unsettles many in our community. The biasing of the survey’s questions in favor of the development and its circumvention of answers that could legitimize the opposition.

In Jeffrey’s own words, “the developer 13th Floor, they have set up a web site of what their future plans are for the community, and what they’d like them to be in the event that they purchase the community golf course. And I know Michelle Gomez is completely aware of that. They setup a site and the site is not all factually true, they’ve added updates to that site recently. Most recently, I was on it late this afternoon again. Is kind of slanted one way, they want you to believe that all the golf courses in the area are failures, and they are putting a lot of restiveness in my community and feelings that their property is not safe, after the community has been developed close to fifty years ago. The most recent thing that came out is that they sent out a survey with a special id code for each resident, I went on this and the questions are all obscured. Now, what is going to happen shortly is, after they tally the surveys, people that don’t go and do the survey, they are not going to count them. I went to a special meeting, for a special board that was set up in the community, and the president of that new board has stated that 13th Floor is only going to count people that respond to their survey, and nobody else, and then they’re going to make a determination on that. I want to make the city commissioners aware that the questions on this survey are all obscured. If you go ahead and you go on the site, and you answer any of these questions, the way is listed, it means you are for this redevelopment, and for their total plans. I have a list of all of this, and if Michelle Gomez would like to meet with me privately, if she has the time – that’s fine, and if not that’s OK too. I plan on attending other commission meetings from now on. And I just want the board to be aware that when they come across here and they say the community of The Woodlands is for this, is unfair and is biased on the way it is stated. One of the things in their newest update states that 23 golf courses, they list the names of 23 golf courses that are closed. One of the golf courses they list, which I believe all of you commissioners surely know is not closed, is Woodmont and Woodmont is on that list. So, it is a bit upsetting to me, and I just want to make the city commissioners aware of this because 13th Floor will be coming soon”.

The vice mayor and the mayor were supportive of Jeffrey’s concerns. Michelle Gomez offered to meet with Jeffrey as many times as needed, and to continue attending the related meetings in the community. Also, reiterated that nothing has been put in front of the commission yet and that there is still a long process to go through. Michelle Gomez empathetically asserted that even though she is a homeowner, she hasn’t completed the survey and welcomed Jeffrey to attend future commission meetings. At the adjournment, Michelle Gomez met privately with Jeffrey Shapiro.

Before thanking Jeffrey for his comments, mayor Dressler added that a developer surveying people is generally seen as a good thing and that the economic development staff surely told them that talking to the community is essential so all involved parties get the opportunity to give their input before the application is discussed at the commission level. But the mayor reassured Jeffrey that it isn’t a survey that makes the difference in how the commission makes the decision about what they approve or disapprove. The mayor’s closing statement, “my two cents, don’t get stuck on a survey and think is the end or to be all, because this commission’s decision is what matters ultimately. If it comes to that. You’ve got a very caring involved neighbor in the vice mayor”.

Jeffrey gave from his personal time sitting in the commission meeting for two hours, he had previously requested a right to speak, and when given the chance he presented to the commissioners the issue that distresses our community within the three minutes conceded.

Jeffrey made sure his opposition to the development of houses in The Woodlands golf courses is not obscured by a biased survey.

When citizens decide to embrace a common ideal the force is with them, and nothing can lessen all voices speaking in unison, loud and clear.

Thanks Jeffrey, we will join you and we will also cover other flanks, we won’t be subdued, and with every step forward we will keep in mind the aftermath of the Sabal Palm Golf Club, the Monterey Club and how the developer in the Woodmont Country Club has gotten his way.

To watch Jeffrey’s participation follow this link and tune to the minute 17:00 of item 5 – PUBLIC PARTICIPATION.