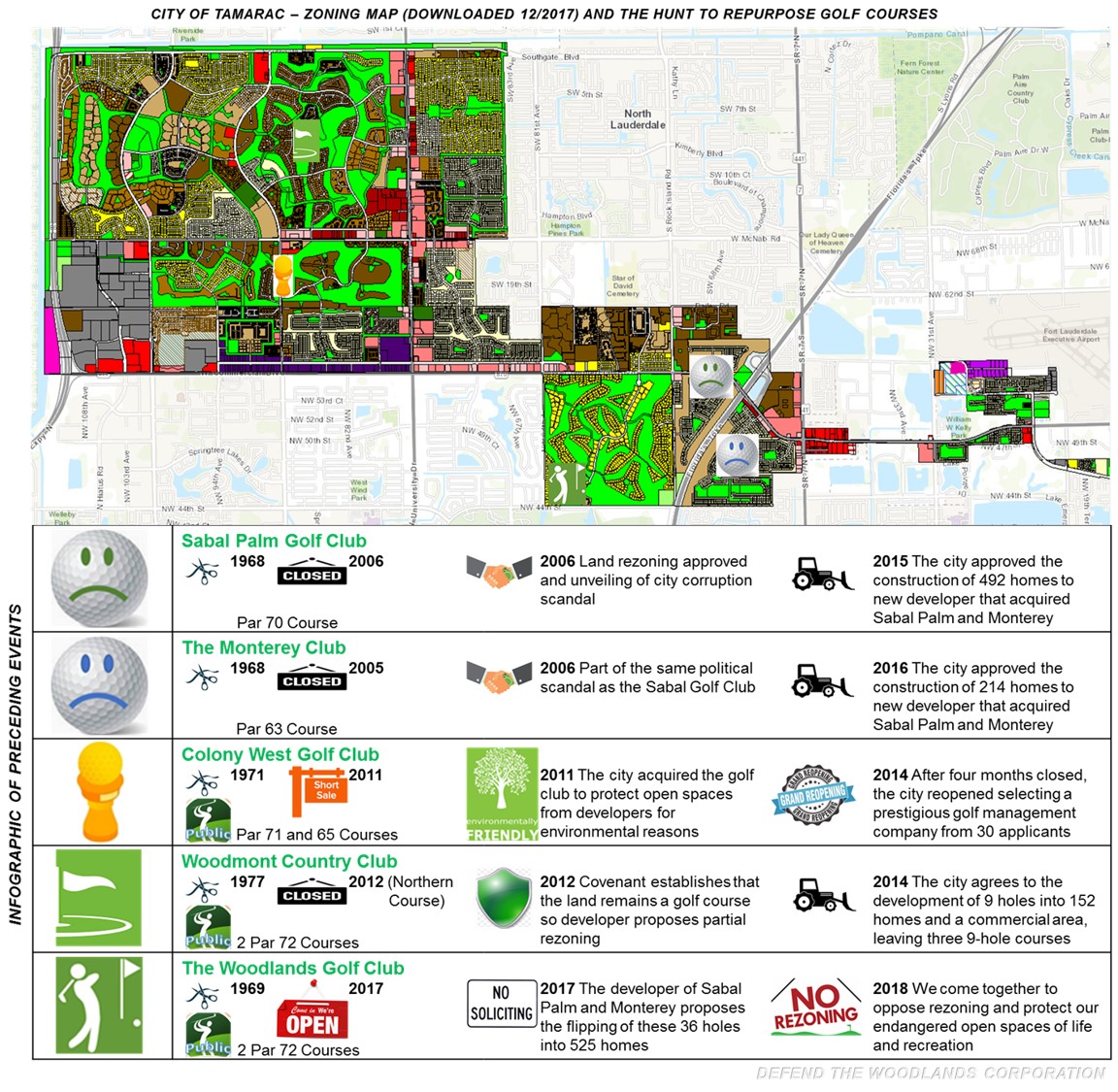 The city of Tamarac is not growing greener, instead it is turning browner. Keep handy the link to the zoning map because a new proposal to change more of its green lands to a browner color, this time in The Woodlands, started its due diligence process and is currently being lobbied.

For some time now, a pattern of besieged open land has been materializing a future with much less outdoor space per person. Less space for sports and recreation, for appreciation of nature and for cleansing the senses. The zoning codes have proven to be unable to protect valued natural resources and places. Unless all the concerned communities (community of interest) stand together for the preservation of its natural, cultural, recreational and historic ecosystem (community of action), all these finite valuables will be extinguished.

The recent past tarnished with political scandal has already precipitated in irreversible damage to neighbors, to fellow area commuters and to the heritage of our community of interest. The community and the elected officials must raise the bar and liaise to contain the consumption of the remaining green open spaces through grassroots incubation of an inner development framework to sustain the conservation of clean water, air quality, breathtaking nature and universal access to recreation.

All authorities, of all jurisdictions, must act in the best interest of the community and use the power conferred to them pursuing collective wellbeing. The open land must be primarily prioritized for the conservation of natural resources and for the preservation of recreational and historic landmarks. Particularly when the code already specifies that its use must be nothing but recreation.

The massive pouring of concrete over every visible inch of open land to build homes and cul-de-sacs addresses the immediate interests of a small group of transitory real estate developers but deteriorates the long-term quality of life of the current residents and the newcomers. Is bad architecture for the city that discourages a healthy lifestyle and impacts negatively the collective well-being. Fences and gates creating barriers between isolated patches of grass, a contribution outside the gates of just more concrete floors where no one walks. The industrialized infilling witnessed in the Sabal Palm golf course, if continued, will turn this city into a dorm and will consume and restrict access to the most valuable and finite resource to influence endogenous development and collective well-being. Finally, when the developers move to their next sweet spot will have left behind fewer resources for a growing population. Less outdoor recreation, higher demand and then, elsewhere memberships required for what we had just a few steps away.

Instead we should be creating threads of green spaces that allow people to walk through the neighborhood surrounded by vegetation to scattered local amenities and services that are safe and allow people to socialize. And we must develop the social, economic, environmental conditions and policies to make all this sustainable.

The ominous infilling pattern continues to progress and has evolved from the re-purposing of closed golf courses that were left to rot, to openly targeting those currently in operation. A total of 492 homes infilled in 109 acres of the former Sabal Palm golf course resulted in a density of about 5 homes per acre. The satellite map shows the character and geometric layout of the higher density infill standing in stark contrast with the urban design of the original single-family homes.

The same real estate developer is now pursuing political support to infill homes in The Woodlands foretelling the imminent closure of its two golf courses. Something that the community never heard before. The last formal communication from the golf club management happened in February 14th 2017 and was the extreme opposite. As taken from the homeowner’s association web site:

The real estate developer is basically asking the community for a leap of faith to put to sleep the two golf courses because they are certain that eventually they will irremediably die. They are presenting themselves as the best of all evils but, clearly, for them is an exorbitant financial gain; 292 acres of recreational land rezoned to residential will produce fast and humongous return on investment. A much better business deal than golf. If the government officials intervene to rezone the land will be creating wealth for the private outsider to the detriment of the quality of life of the community they serve.

They are gaining traction; some community members fear the prospect of a rotten golf course in their backyard and have started the conversation about their individual requirements.

We need to gain credibility and support for a sustainable solution that keeps the two golf courses pristine.